1000 Ways To Die Wiki
Register
Don't have an account?
Sign In
Advertisement
in: Way to die, Death by karma, Death by falling,
and 33 more

Name of the death is a pun on "homie" and "homestead"
"On a hot summer night, a husband met a thief. Vince got away with the goods, but Brad went away for good." (US False ending)

"There'll be no resurrecting you Vince, ya rat bastard." (US True ending)

"On a hot summer night, a husband met a thief. Vince took off with everything, and Brad was gone... forever." (Translated LAT False Ending)

"Nobody is going to resurrect you Vince, you jerk." (Translated LAT True Ending)

As Brad and Tracey slept in their bed, they open the window trying to let the warm air out of their room. Little did they know was that open windows can give a burglar such as Vince the chance to break in and steal things. While they are both asleep, Vince sneaks in and begins to plunder the house. When he plays with an object that makes a sound, he wakes up Tracey, who in turn, wakes Brad up. Brad pulls his gun out of the drawer and quietly exits the bedroom to investigate. But when he checked, Tracey loudly asks what's going on, prompting Brad to tell her to be quiet. However, the volume of Tracey's speaking alerts Vince, who grabs a baseball bat out of his bag and hits Brad on the head, killing him and sending him to heaven. Terrified, she tries in vain to resuscitate Brad after he dies, but it was no use; her husband was a goner.

"Wait a minute, One came freaks… You think about the bad guy get it off? Check it out! Brad was dead, but he wasn't. Is time to you to learn something called Lazarus Syndrome."

Vince threatens to kill Tracey if she takes a step towards him, not allowing her to continue CPR. Eventually, Vince finishes robbing the house and is about to escape, when suddenly Brad lifts himself up off the floor, exiting heaven and returning to earth alive. It turns out that while Tracey was performing cardiopulmonary resuscitation with Brad, her hands pushing against his chest made his heart beat again, thanks to which, Brad regained consciousness, a rare form of circulation called Lazarus Syndrome.

Stepping out of the window door, Brad has revived and confronts the thief. The shock of seeing the man he supposedly killed causes Vince to lose his grip on the rope, fall off the balcony and land on the sidewalk. The impact breaks the back of his skull like an egg, killing him and sending him to hell. When Tracey saw her husband alive, she felt relieved, knowing that he survived and that the crisis was over. 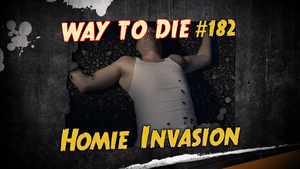